Skip to content
You Are Here:
Home
/
Education
/
Go Green Year-Round with Fescue

Go Green Year-Round with Fescue
We’re harvesting Tall Fescue at the farm, so now is the perfect time to establish a beautiful new Fescue lawn. This popular grass variety adapts well to a variety of environments, and it is often valued for its lush green appearance, which it maintains throughout the year.

About Tall Fescue
A cool-season turfgrass, Fescue grows best in areas north of I-20, which runs east to west from Birmingham through Atlanta to Augusta. Of the cool-season grasses, Fescue is one of the most heat tolerant and drought resistant, while still capable of surviving the freezing winter temperatures of North Georgia and far beyond.

Many landscapers choose Fescue for lawns with varied conditions, since it tolerates sun and shade as well as damp soil fairly well. Rebel® Supreme Fescue is cultivated for a denser root system to resist drought better than other Fescues, a necessary feature for our sometimes harsh summers.

Fescue does not tolerate close mowing, however, so if you prefer a more compact grass, Bermuda or Zoysia may be a better choice.

Care and Maintenance
Mowing
Tall Fescue grows best at a height between two and three inches, but in hotter weather raise the mowing deck half an inch to help protect the roots.

Watering
Like most grasses, Fescue requires one inch of water per week, including rainfall. 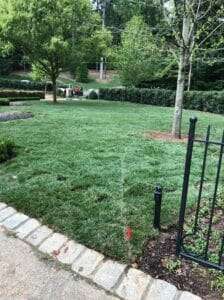 Remember, over- or under-watering and watering at the wrong time of day can harm your lawn.

De-thatching
Unlike Bermuda and other varieties, Fescue does not usually require de-thatching.

Controlling Weeds and Pests
Use products recommended by NG Turf or your local Extension Office.

If you’re in the market for a Fescue lawn, contact our Certified Turfgrass Professionals at770.832.8606 or email at info@NGTurf.com. NG Turf is an exclusive producer of Rebel Supreme Fescue.