Bringing a new turfgrass to market requires years, if not decades of development. More than 15 years ago, Dr. Ambika Chandra, a Texas A&M University professor and turfgrass researcher, began testing thousands of crosses between Kentucky bluegrass and Texas bluegrass, looking for high-quality turf with desirable aesthetics and improved tolerance to heat stress.

Now, in partnership with NG Turf, two of those crosses — Southern Blue™ and Sunbelt Blue™ — are ready for homes, businesses, public properties and golf courses across the transition zone.

“We were looking for a year round green, cool season grass that could handle the Southeastern climate,” explained NG Turf President Aaron McWhorter. “Tall fescue has been the standard for decades, but it has challenges relative to drought and heat tolerance. The point of the research was to find a variety better suited to our climate here in the transition zone.”

The experimental lines were tested for quality and aesthetics in various locations to evaluate performance under different environments, growing conditions and levels of maintenance.

Based on results from this extensive research, Texas A&M chose two of the highest performing bluegrasses, Southern Blue and Sunbelt Blue, to bring to market.

“The exciting innovation for these new bluegrasses is that they are rhizomatous,” noted McWhorter. Most warm season turfgrasses, like Bermudas and zoysias, have horizontal root systems, which allow them to spread and regenerate. Stolons spread along the top of the ground and rhizomes spread underground, each sending up grass shoots with vertical root systems along the way. Most cool season grasses, however, grow only from seed with individual vertical root systems that cannot spread or regenerate, requiring frequent reseeding.

Both Southern Blue and Sunbelt Blue repropagate through their underground rhizomes, a necessity for recovery after damage from wear, disease or injury. “If you have a fescue lawn that sustains damage, you have to overseed, whereas these bluegrasses are able to recover on their own, saving time and money,” McWhorter said.  A vigorous root system is also an important feature for survival during Southern heat.

“Fescue is a popular option for heavily shaded areas in the transition zone where people want year round color,” said McWhorter. “It’s not a perfect fit, but it’s commonly used and a common loss of money for landscapers and homeowners.”

In studies conducted by Dr. Chandra, the new bluegrasses were shown to have strong shade tolerances, similar to Fescue.

Another key feature of these new bluegrasses is their strong disease resistance. All cool season grasses are prone to diseases such as large patch, mainly during summer months. Research has shown, however, that Sunbelt Blue and Southern Blue provide a higher level of resistance than fescue and also recover quickly from disease damage.

Jutt Howard, VP of Operations at NG Turf stated, “Southern Blue was the first and obvious choice due to its dark green color and top performance from all the research data collected. However, Sunbelt with its bright green color just kept standing out, and we had only observed disease in it once or twice in 15 years. We believe Southern Blue and Sunbelt Blue to be exceptional alternatives to fescue.”

“I have looked at this bluegrass over four years in multiple locations to better understand its performance under shaded conditions. At the UGA Griffin campus, in a trial under heavy tree shade the bluegrass plots were a top performer and maintained greater canopy coverage than tall fescue and warm-season species including zoysiagrass and bermudagrass. This bluegrass has consistently shown good performance in the shade and the ability to provide year round color. Although as a cool-season turfgrass there should be considerations for how it will perform and best manage it in the heat and under drought conditions.”

In addition to selling directly to homeowners, landscape contractors and golf course superintendents, NG Turf, in partnership with Texas A&M and The Turfgrass Group, will be licensing these trademarked grasses to other sod producers.

McCollough, with UGA Agricultural and Environmental Sciences, has been studying the new bluegrasses for the past five or six years. “NG Turf has seen the research, and they have been doing some in-house research as well, looking at the relative performance of the new bluegrass varieties compared to tall fescue and also warm season grasses,” he said. “They see a real opportunity for these grasses to be introduced to Georgia and throughout the transition zone.”

He went on to say that fall will be the best time for sod producers to get the new bluegrasses established. “These grasses cannot be seeded; they have to be established vegetatively. They start from sprigs, growing laterally into a mature field so the sod can be harvested.”

The new bluegrasses grow at a rate similar to other zoysia grasses, like Zeon, and can typically be harvested around 12-to-14 months from planting. They are recommended for the Atlanta area and points north, since warm season grasses tend to fare better south of the fall line.

For the first couple of years, McCullough focused on weed control during bluegrass establishment. “We were looking at the best ways to grow in these grasses and prevent weeds from establishing at the same time. We looked at different pre-emergent herbicides, postemergent herbicides, and various application timings relative to the maturity of the grass in the fall and the wintertime. We wanted to determine the most effective programs to control problem weeds without causing excessive injury in the hybrid bluegrass turf.”

Howard reported that NG Turf has collaborated with other researchers in similar fashion to develop best practices to support both producers and end users growing Southern Blue and Sunbelt Blue. “For years, we have been assessing everything from shade and drought tolerance to cold hardiness and wear resistance, optimum mowing heights, pH levels, fertility requirements — all the specs you need to grow vigorous premium turfgrass. We think we’ve found strong alternatives to fescue that can be used throughout the transition zone.”

According to Howard, demand from customers in the first few months of sales has been even higher than anticipated. “One of our landscape customers told us he believed it to be a ‘game changer’ for heavily shaded lawns that typically require fescue.” 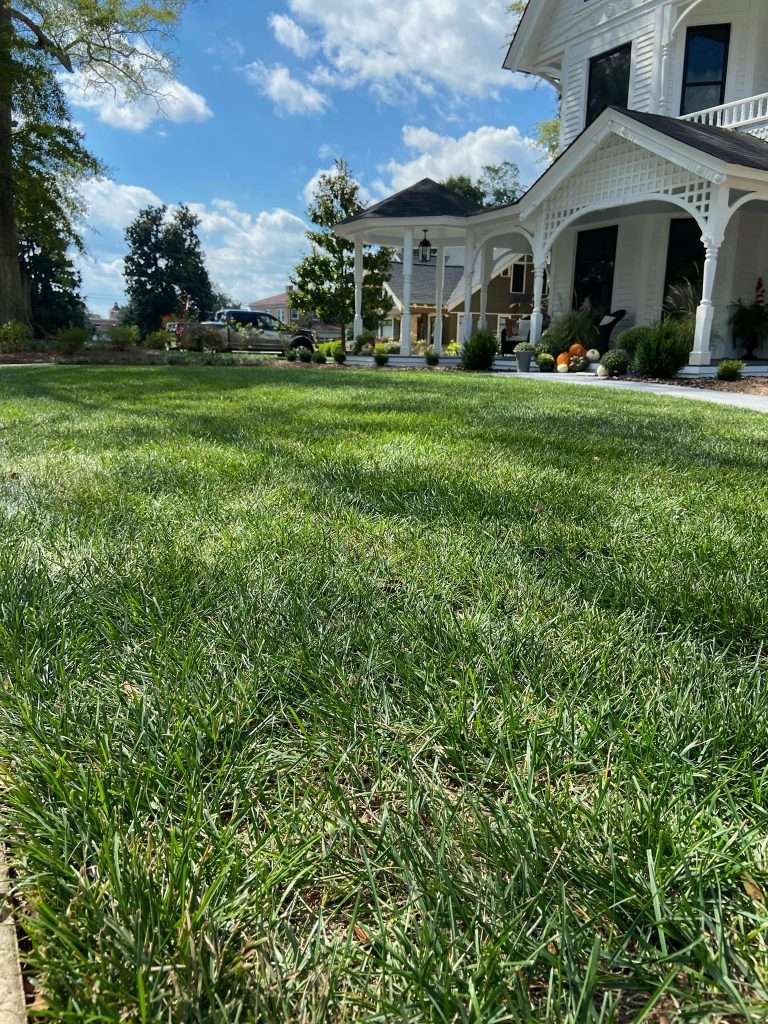 Sod producers interested in these varieties can contact a representative to arrange to receive some testing material: Jutt Howard at NG Turf, 678-618-4304 or Bill Carraway at The Turfgrass Group, 404-276-4141.